On the Discourse Community of Electronic Music III.

To continue the previous posts, I want to elaborate the fourth statement in my list, namely:

It is vital to analyze these genres, because the basic technical communication progresses could be seen on these channels. There are several different Internet genres with the topic of electronic music. An example was showed from an Internet forum in my first post. Now I would like to give an observation on the individual multimodal texts.

Multimodal texts are defined as texts, which communicate their message using, more than one semiotic mode, or channel of communication. In electronic music scene, we can talk about flyers, posters, and album covers as examples for multimodal texts. The recent post presents only flyers, which advertise different electronic music events. With analyzing these small-sized leaflets, we can easily get closer to very specific and unique symbols of the music scene. And at the same time these fine observation helps us to understand some communicational procedures as well.

For example here is a flyer from the acid house scene: 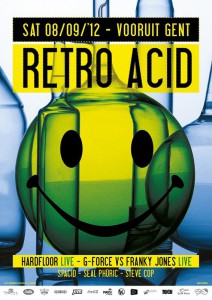 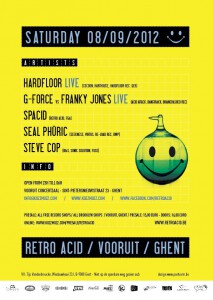 If we pay attention on its elements, the following observation is relevant:

A basic symbol of acid house flyers is the Smiley-icon. If the originally icon, designed by Harvey Ball, has become the most well-known emoticon on the Internet; it is a symbol and an index in acid house context. It is an index, because when someone – who is familiar with acid house scene – has a look on a flyer, immediately switches in her/his mind to an acid house event. It is a symbol, because the person switches not only to the event in itself, but to the whole ideology what is behind this music scene. E.g. to the „PLUR“ ideology („Peace, Love, Unity, Respect“), symbolizing that people go to these events together, feeling respect for each other in a peaceful coexistence.

If we analyze also the text symbolism, several fine elements could be found, too. For example on the back of the flyer, the line-up can be read. Behind the names there are some very important information for the people who want to take part in the event. These „bracket information“ are normally about the musicians‘ resident locations, labels, and countries. They symbolize specific meanings for the audience; if they even do not know exactly the musician, but know the label or the resident location, and have a good impression or experience on them, they will go to the event. E.g. on the flyer behind Hardfloor’s name stands „(Cocoon, Harthouse, Hardfloor Rec, GER)“. Cocoon Club is a well-known venue in Frankfurt/Main (and later also in Ibiza) for electronic dance music. If the reader does not know the duo Hardfloor, but knows the venue, it might mean still a lot for him/her. And if the connotation of Cocoon is positive for him/her, he/she might go to the event too. (These small symbolic meanings are part of the advertising and manipulation strategy as well.)

At the same time these fine symbolic communication tools are also visible in other electronic music streams. E.g. goa is famous for its oriental symbols from Asia. On a goa flyer, several colorful eastern symbols can be seen. They are also part of the goa ideology. The UFO symbols, the „Om“ sign, and the Hindu ornaments are all important tools on a goa flyer. They are symbols and indexes in a Peircean way of thinking. 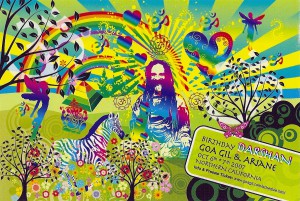 Every stream has own attributes. If for acid house the main icon is the smiley, for goa the Om sign is the one.

Therefore, we can say that the different ornaments of subcultures are visible on these mediums as well. For instance, the people from goa community go to their events in colorful and Indian clothes; and the symbols and colours they wear are also on goa flyers.

And maybe the most interesting phenomenon is that not only the objective symbolisms go hand-in-hand on flyers and on the community’s habits, but also these ornaments originally come from the music itself. Like the Indian sounds are the parts of goa tracks.