On The Discourse Community of Electronic Music II.

As it was written in my last post, I continue to prove the 6 earlier mentioned statements on the discourse community of electronic music. The following points are the second and the third, namely:

2. It has own mechanisms of intercommunication.
3. These mechanisms were set up to provide information about electronic music.

These mechanisms are not confined only to the level of words, but also to the texts. The frequent usage of unique technical terms can be recognized, and at the same time, the texts are constructed also in an individual way. For these cases, several examples of conversation pieces from different weblogs, forums and social networks can be observed: (a) the shorten forms, (b) the unique way of constructing text and (c) the use of metaphorical language can be recognized in these texts. A good example for them was showed in my last post. But what do these features mean deeper? 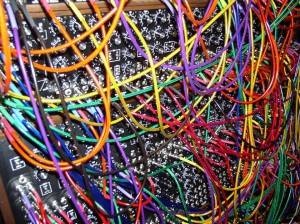 Let me begin with (a) the shorten forms. In general, thanks to technical developments and contemporary social behavior, we need to get information faster and faster, a phenomenon which leads to several changes in our language use as well. One of them is the usage of shorter and „quicker“ forms that can be also found in technical texts.

Continuing with (b) the unique way of constructing text, it is considered that also in this case, the focus point is on the easiest way of receiving information. Short texts, easy-written (somehow slang) sentences, fast questions are the most adequate way of writing. And these features are true not only for Internet genres, but also for general technical texts. The texts are focused on the main information while using several technical terms.

The third question is (c) the use of metaphorical language. In Wittgensteinian way, we have to ask if we are able to use our languages (not the inner one!) to talk about music? A whole book would not be enough to answer the question, but I try to summarize my observations on it. The borders of our languages have been proved; sometimes it is impossible to talk about feelings, sensations, voices etc. in the case of music. We have to deal with the „language on the surface“ what is not enough in several cases. In these moments, we stop talking, searching for words, expressions and say, „You know what I mean“.

Looking at this phenomenon as a linguist, it exactly plays very important role in the language use by musicians and other people who are part of the electronic music culture (e.g. fans). This use of metaphorical language can be observed at best in album critics and reviews, when a writer wants to express his/her own impressions on music. Here is an example for that:

Bound to split the biscuit, this one: esteemed Dub Techno and Ambient producer presents his Luomo-like suite of vocal-heavy House and Pop. As Yagya, Aðalsteinn Guðmundsson has borne three albums of exquisite ambient techno strongly informed by the likes of Gas, Basic Channel, and Brian Eno. They’re all much loved by those who own them, but they’re also all instrumental, so it’s a bit of a shock to hear full-blooded vocals covering the majority of ‘The Inescapable Decay Of My Heart’. Luckily it does come with a disc of instrumentals for those who can’t handle that level of human emotion, but as for us, we’re not so turned off. They’re a bit raff at times, but but when they work, they do so surprisingly well, finding a fine middle ground between Moritz Von Oswald’s most stripped down Dub House and the ebullient beauty of Vladislav Delay’s Luomo work, all with extra atmospheric detail.“

There is no comment what would be needed to add to the lines above, because the metaphorical expressions like ‘Luomo-like suite of vocal-heavy House and Pop‘, ‘full-blooded vocals‘ or ‘they do so surprisingly well‘ describe in a rich and suggestive way how the author has experienced the tracks in question. More mechanisms of intercommunication could have been described, but for the present post, the above ones were the most relevant.