Honey is Something We Make Together

“They don’t have honey here,” a man said confused. At the end of his journey through the tent of the installation, he was disappointed that there was no honey to taste. Instead, he had to navigate through four different spaces filled with sounds of bees, birds, and tower bells coming from the hidden speakers behind the piles of blue bee hives that surrounded him.

This man was moving through the installation called Honey is Something We Make Together, which happened on Copenhagen’s annual Kulturnatten (11 October 2019) and was part of the ‘Live Like Tomorrow’ C40 World Mayors Summit. The aim of the festival was to raise awareness on the role of cities and their businesses in relation to climate change and the creation of sustainable environments. The installation was created by Oliver Maxwell (Founder of the Bybi Honey Company, Copenhagen) and Melissa Van Drie (‘Sounds Delicious’ Project, Arts & Culture Department, University of Copenhagen), with scenography of architect Mia Frykholm and collaboration of Kathrine Friis (Bybi). With Oliver being the director of Bybi that produces raw local honey and Melissa running a research project on sensory experiences of food, they decided to join forces and explore the different aspects of honey-making.

Their installation consisted of four different spaces that focussed on different aspects of the honey-making process. People silently entered a space and listened to sound recordings of queen bees communicating with each other through the rubbing of their wings and the shaking of their bodies. Listeners were invited to imagine the ways bees feel sonic vibration. Next, visitors were led into a second space where they could touch and smell honeycombs created by the bees. In the third space, a bee keeper was waiting to hand over a flower bulb that would turn into a crocus. The visitor was then invited to dip their finger in paint, choose one of the places written on the walls of the fourth space, and mark the spot where they would plant their flower. 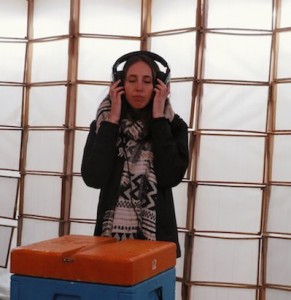 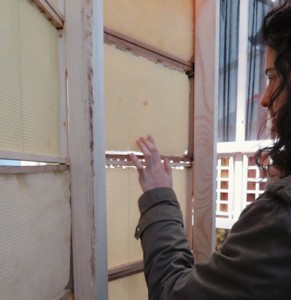 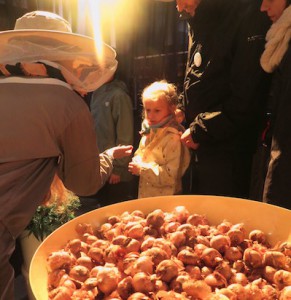 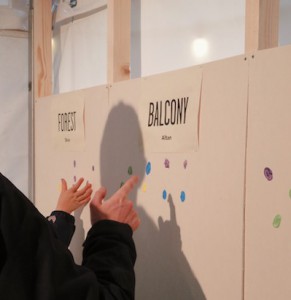 Bee sounds and fingerpaint? One might ask what all of this has to do with honey-making? However, when walking through the universe of smells, sounds, and feelings, one realises that this installation was not as much about honey-making as it was about the people that visit it. Everyone listened with their eyes closed, stroked and pushed their  fingers into the honeycombs and smelled the scents around them. It evoked sensations that many could only describe as “different.” A “touchy-feely kind of thing” which could not be captured easily into words. A teenage boy comments on his headphone experience: “It was really satisfying to hear all the bees and the guy who was talking. […] It was like you were in the situation even though you were just standing there with some headphones on.” Listening to the sound recording created the sense of “being in nature” and “being in the moment.” It re-questioned our connection to nature and our senses. Touching the honey-combs also challenged their relationship with nature’s materials: “It was a different feeling. I don’t know how to describe it. I expected it to be really tough material but when I pushed it, I almost pushed all the way through.”

The alternative and non-visual sensations that the installation evoked made visitors think about their relationship to the materials and environments in which bees produce their honey. Through emphasising their sensory experience, visitors in this installation became aware of how they as humans take part in a system. A man wipes off the paint of his finger and becomes aware of his part in honey-making: “The whole situation with the painting and the fingers, it shows how many people show interest in this area and for planting flowers to help the bees.”

Honey is Something We Make Together shows how getting in touch with our senses and embodied forms of knowledge can serve as a means to explore our role in honey-making and our role as self-declared humans in our urban environment at large. For now, we will have to sit through winter to see the planted flower bulbs grow. In spring, however, the crocuses that appear on rooftops, in gardens, meadows and parks will show how humans have a crucial part in how honey is made. The man who was looking honey for left the installation. What he didn’t know was that a taste of the result of this great co-creative honey-making process was waiting for him in the Bybi shop just a few steps away.