Everybody’s a different kind of alien. In these small words, found on some recent evening in an online conversation with some good overseas friend, the main issues of this small anthology are unexpectedly yet concisely addressed: the cultural and historical, even extraterrestrial and futuristic relativity of anthropological claims; the transdisciplinary and highly reflexive character of contemporary anthropological research; and the strong focus on the performativity of the senses and the body, of sensing and experiencing in anthropology. 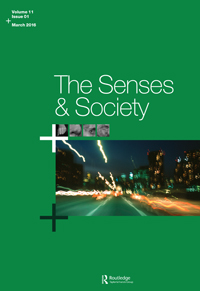 This special issue of The Senses & Society presents six different takes on an anthropology of sound by Christoph Wulf, Carla Maier, Veit Erlmann, Ulrike Sowodniok, Jacqueline Waldock, and my humble self. All six contributions engage in a renewed discourse about an anthropology of the senses that should never be considered to be static and unchangeable. As sensory experiences as well as confrontations with audio media transformed and educated its recipients and producers so drastically, it would be almost ridiculous if not dangerous to assume sensory experientiality in general would still be the same as in the notoriously referred Neanderthals. After an assumed End of Man (Western, White, Middle-Class, Academic Males I feel urged to add) and in times of intensely globalized, mediatized, commodified and heavily networked societies this fundamental reflection seems fascinating again: What varieties, what forms of excess, transgression and invention, what potential is there, in this creature one might be tempted to call now rather a Humanoid Alien?

An Anthropology of Sound in this definition, as presented in this special issue, such an anthropology would indeed not superimpose an imaginary norm of humanoid behavior – but open up an endless series of variations of evermore strange and alien extravaganza of how humanoid aliens might perform, perceive and protrude.

Because every one of the authors (and readers) meeting in this anthology actually is a very different kind of an alien for sure.