The Sound of Corona

Can you hear the coronavirus? What does it sound like?

Recently, some compositions which used data gathered from the coronavirus, stirred up some conversations among listeners, composers, musicians, scientists, engineers, and artists: the Proteine Counterpoint Sonification.

This sonification was produced by the engineer and material scientist Markus J. Buehler and his team. They claim to have generated the sounds from original data stemming from the virus, following a sonification method for proteins which they described in an article from 2019: A Self-Consistent Sonification Method to Translate Amino Acid Sequences into Musical Compositions and Application in Protein Design Using Artificial Intelligence:

»The vibrational frequencies are transposed to the audible spectrum following the musical concept of transpositional equivalence, playing or writing music in a way that makes it sound higher or lower in pitch while retaining the relationships between tones or chords played.« (Yu, Qin, Martin-Martinez, Buehler 2019)

Their method demonstrates some of the fundamental steps for sonification: gathering data, assigning rules of transposition or transformation of these data entries into audible sound events (cf. Hermann, Hunt, Neuhoff 2011), organizing these sound events into a time-based structure that listeners of a largely westernized, vernacular music culture may recognize as ‘musical’ – and that allows for a new, scientific insight into the material. This last point is, allegedly, the main goal of a scientific sonification. 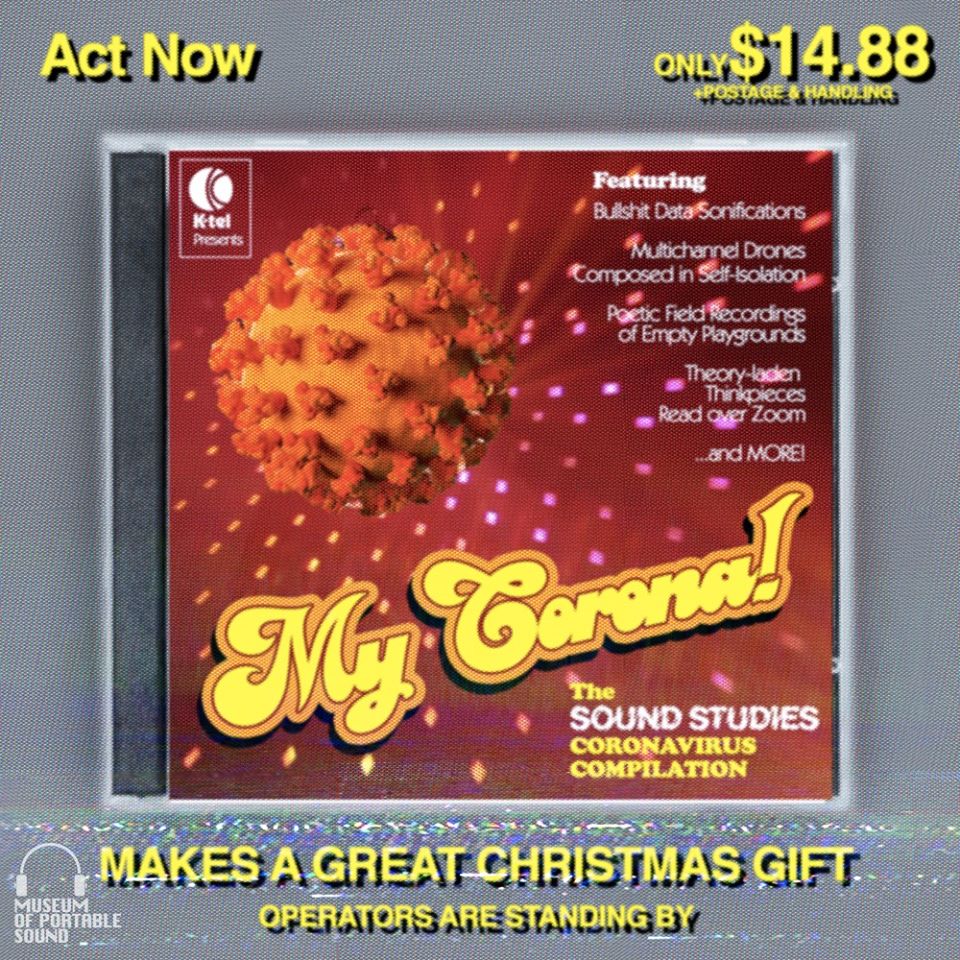 The results of Buehler and his team sound quite pleasing. One listener to the Soundcloud upload commented: »Reminds me of Chinese meditation music.« You might recognize the sound of a lute, a spinet or even a japanese koto. The tempo is somewhere between lento and larghetto, there is a constant pulse and a counterpoint; it has a character of minimal music and some listeners might even be reminded of Johann Pachelbel’s iconic Canon and Gigue in D major, that has been used recurrently to represent a notion of cosmic universality and unity between all lifeforms and all natural and cultural processes. Some listeners, hence, seem to have expected a more threatening sound – but of course it does not sound threatening: a biological process of viral expansion is only actually threatening from the perspective of the affected lifeforms, not from the perspective of the expanding virus. The expectation that a sonification of a virus potentially carrying deadly diseases would also sound threatening and deadly, is a deeply anthropocentric one: an expectation that treats a scientific sonification like an aesthetic artifact, a musical composition. Yet, a scientific sonification is not a musical composition.

However – and that is really the main flaw of this sonification, I‘d say – there is not really a scientific insight to be gained from it, at least not from what I heard or read or understood. The six pieces presented remain largely in the realm of somewhat pleasing sonic artifacts, with various references to existing musical genres and sound designs. As a result, the main goal of sonifying any dataset, the goal to gain new insights into the material, is not really achieved.

So, is this sonification then closer to a musical composition? And what would we expect from it then?

As listeners we surely would expect something completely different from an actually contemporary, artistic interpretation of the coronavirus than from a sonification. In this case, the aesthetic decision for certain sounds or musical structures would then not be camouflaged by an often failing argument of being directly determined by a dataset and not by a producer’s personal decisions: whenever the personal is hidden underneath a notion of the objective, neutral or even the arithmetic, one can be very sure that deeply personal inclinations and idiosyncrasies will have a much stronger and unmitigated impact in the end. This means that also producers of sonifications are actually mainly composers of a certain kind, with certain aesthetic preferences and aversions, maybe even obsessions and definitely also a particular personal style and sonic or musical aesthetic (of what quality or of what expertise we would then be able to discuss).

In case of a clearly musical representation some of us would probably expect it to sound indeed threatening and to represent – obviously in a refined and aesthetically interesting and challenging way – the phenomena of social distancing, masks, hand sanitizers and gloves. It could even include in its artistic and instrumentalist techniques some of the harsher symptoms one does apparently experience when fallen ill with the lung disease of COVID-19 such as troubles with breathing and a persistent pain or pressure in the chest. Maybe the musical material of circular breathing techniques could be employed, explored, skilfully disrupted and expanded in such a composition?

Other listeners might wish to hear more of the punctually decreased social activities in public places that seem so characteristic for social life these days. A hum of looming danger, underneath all of our activities – at times louder, then almost inaudible – but in general not a musical structure, more an arithmetic display of expansion and decrease that avoids the more trivial illustrations. Such a composition could then maybe sound like this recent record by Thomas Köner: Motus. The hum of the pandemic.

But maybe we wish even to recognize the sound of getting in touch through one of the videoconferencing tools that dominate social activities under Corona. I am thinking here of the strange effect that through these tools two, three, five or ten people can interact with each other, sonically and visually, and each of them can be seen and heard in totally different rooms and environments. Sometimes the characteristics of these rooms are wiped out, but in many more focused productions of a higher quality, one can actually hear the switch between and the mash-up of these various room acoustics: a quite unusual experience for a lifeform like ours that is not yet familiar with teleportation.

For me, personally speaking, this mash-up of room acoustics is perhaps the strongest sonic signature of the pandemic these days: a sonic icon of being bodily distanced yet socially even more connected (and I haven’t even yet touched upon the painful class struggle between precarious gig economy workers on the streets and the privileged self-quarantined in larger mansions or spacious appartments: the actual challenge for any musical piece might lie precisely in this struggle).

All in all, I would claim this sonification by Buehler and his team serves primarily the purpose of science communication, which is fair enough. It needs to be compared, understood and interpreted as a sonic equivalent of the visual representation we all know so well by now (a grizzly, fluffy ball with loads of scary and bright red triangular spikes attached to it), crafted by Alissa Eckert and Dan Higgins for the CDC: an iconic design, ready to be used for communication purposes across all media and publication formats. But neither the visual design nor the sonic design of the coronavirus is a means of research or a tool for further insights, right now.

How could one then employ sonification for a more scientific purpose in this particular case? One proposal came recently from the sound designers around Rainer Hirt: they proposed a series of single sounds for the single most important constituents of the coronavirus and their activities. So, they designed the »Spike Glycoprotein, the Hemagglutinin-esterasem, the Matrixprotein, the Envelope, and the ssRNA und N-Protein« and they subsequently combined so-called »audio scenes for 4 major processes within the viral infection cycle: (A) Attachment & entry, (B) Replicase protein expression, (C) Replication & transcription, (D) Assembly & release«. These individual sounds and scenes now indeed could help to identify and to analyze the activities of the virus; I am still not sure, what insight could be gained; however, it seems to me that these sound dewigners propose primarily a sonic repertoire that can now be used by researchers, designers, artists. It offers, if you will, a sonic toolbox for analysis less than an aesthetically pleasing artifact, ready for dissemination across all media platforms. And that is an inspiring and generative first step, in my understanding.

Aside from this, a sonification could also focus on the global spread of the virus and its acceleration: this could provide indeed deeper insights. Or a sonification of the actual propagation of a virus (or a plethora of virus particles) through one individual body’s various respiratory pathways, organs and systems. One could then even craft a sonic artifact close to this legendary sonification, almost two decades old now, developed and refined by Isao Hashimoto in 2003: a visualized and sonified sequence of all the nuclear explosions, their locations, and their home nations in the years between 1945 and 1998.

This piece offers – only through the method of sonification – a synopsis of events and of developments that one could not gain access and insight into in any other way:

(note: this article has been republished by Passive/Aggressive on May 1st, 2020)