Just out now on Bloomsbury press is a new volume on the historical, conceptual and political repercussions of sound studies, especially in the area of an anthropology of sound. 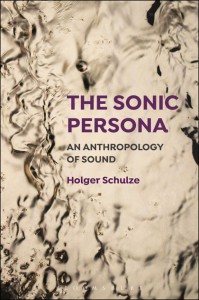 In The Sonic Persona, Holger Schulze undertakes a critical study of some of the most influential studies in sound since the 19th century in the natural sciences, the engineering sciences, and in media theory, confronting them with contemporary artistic practices, with experimental critique, and with disturbing sonic experiences.

From Hermann von Helmholtz to Miley Cyrus, from FLUXUS to the Arab Spring, from Wavefield Synthesis to otoacoustic emissions, from premillennial clubculture to postdemocratic authoritarianism, from signal processing to human echolocation: This book presents a fundamental critique concerning recent sound theories and their anthropological concepts – and proposes an alternate, a more plastic, a visceral framework for research in the field of a cultural anthropology of sounding and listening.

This anthropology of sound takes its readers and listeners on a research expedition to the multitude of alien humanoids and their surprising sonic personae: in dynamic and generative tension between predetermined auditory dispositives, miniscule and not seldomly ignored sound practices, and idiosyncratic sensory corpuses: a critique of the senses – with the claim: »I’m going to prove the impossible really exists.«

Two reviews, by scholars Michael Bull and Anahid Kassabian, might grant you a glimpse into what awaits you in this volume:

»This is a wonderfully iconoclastic book, widely eclectic and learned. Written in the spirit of its sonic heirs, Kodwo Eshun and Michel Serres, it proffers an anthropology of sound like no other. It engages the reader in what Schulze poetically calls the art of receiving sound that is alert to the cultural, political, bodily and material nature of sonic practices. In doing so the book shifts and widens our understanding of the practices of sound and the art of writing about it.«

»The Sonic Persona is a groundbreaking work. While most works pay lip service to thinking about the senses and the sensorium, Schulze actually mobilises these ideas to challenge the ways we think and talk about sound. While we have had a generation of thought about the impossibility of objectivity and what a thoughtful, subjective scholarship might look like, The Sonic Persona enacts that critique and forges a path for genuinely scholarly, rigorous subjective analysis. Anyone who wants to study sound, music, audiovisuality, or multimodal arts practices will have to read this book. Perhaps most importantly, they’ll want to.«

You can order The Sonic Persona from Bloomsbury Academic as ​hardback, softcover, EPUB & PDF.