Have you ever thought about speaking aloud or singing as active exercises for strengthening the body? This was a commonly shared supposition amongst physicians in 19th century Britain where physical education gradually took its shape during the century. Physicians took part to the conversation of physical education and the urgent need of it, and suggested different scientifically proved forms of exercises in order to make people healthier and happier.

The concept of ‘exercise’ and ‘movement’ did not, however, follow conventions that we would nowadays recognise through our understanding of sports. Instead, the concepts were based on the contemporary physiology that included various vocal and sounding practises which were connected to the embodiment of sounds. In my current research I approach those practises through the work of British physician Mathias Roth (1818-1891) who introduced several practical exercises for curing and strengthening the body, and which had something to do with sounds. I am going to call those practises ‘sonic exercises’ and show how they were considered similarly as ‘movement’ as other more traditional, and for us more recognisable, forms of exercises.

As ‘movement’, in general, was regarded any action or motion that increased the supposed circulation of vital energy in the body. This ‘vital energy’ was also called ‘animal heat’ or just ‘energy’. This energy was considered the element that marked the difference between animate and inanimate, and thus it was also considered the main element of human vitality and performance. As a result, physical educators and physicians in 19th century Britain tried to invent exercises for increasing the circulation of vital energy since it was the element that had to be taken care of for achieving health.

How had sounding then anything to do with these kinds of exercises? Making sound was considered as an embodied practice since it required muscular action, such as activity of abdominal muscles. Also the diaphragm, the chest, the stomach and the organs of respiration took part in the process of sounding, as it was proven and documented in then-contemporary medicine. Hence, sounds did not appear out of nowhere but were the result of embodied effort that could be trained through exercises.

In the health guide called “The Prevention and Cure of Many Chronic Diseases by Movement” from 1851, Mathias Roth introduced readers to different kinds of exercises that should cure one’s diseases. Several of these exercises indeed follow my definition of sonic exercises; according to Roth, those sonic exercises would cure or affect surprisingly many diseases. Generally, sonic exercises were based either on strengthening the abdominal muscles, the chest, and ‘the organs of voice’, or on expanding the lungs. For example, a lateral curvature of spine, ‘in which the convexity of the upper curvature is to the right’ (Roth 1851: 252), could be cured by resting on the right side while reading aloud or singing. For doing so, the left lung would be more activated and consequently would diminish the hypertrophy of the right lung. 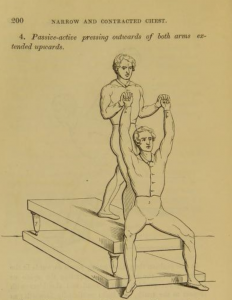 An alternative exercise for strenghtening and expanding the chest. Roth 1851: 201.

Sonic exercises did not only cure bodily deformities but were also helpful with in curing tuberculosis, inflammation of the larynx and windpipe, or promoting digestion. Besides speaking or reading aloud and singing, blowing the flute and sounding of the trumpet were considered as efficient exercises as they increased the capacity of lungs and strengthened the chest. Still, one has to remember that sonic exercises were not the only options for curing these diseases, but they functioned as optional exercises: for strengthening the chest or expanding the lungs, pumping and horse riding are mentioned in Roth’s book, for instance, as well.

Another typical sonic exercise was the so-called “curative method by music”. As Roth describes, ‘the tune, which is but the name of a vibration produced by the air on our auditive nerve, is very important in the cure of deafness, because this nerve is particularly disposed to become paralysed by inattention and disuse’ (ibid. 73). The common law of vital energy of the period designated that in whatever body part there was activity, there would also be development. That is why sonic exercises, like any other of the exercises, focused on activating the body parts that were otherwise neglected or undeveloped.

Music was likewise recommended for mental illness, such as hypochondriasis and depression, and Sydenham’s chorea, known as St. Vitus dance in which the patient moved rapidly, uncontrollably, and reluctantly. More specifically, beating the drum or ringing the church bells were preferred and recommended methods for calming the mind and reluctant movements. Accordingly, sonic exercises were not only for making sounds but also for listening to them: the body responded to both methods, which is why sounds in either way had their desirable, healing effect.

Altogether, sonic exercises were as much embodied exercises and movement as other recommended movements for cure in 19th century Britain. For strengthening one’s body, it was not necessary to lift heavy weights or run a mile, but to make or listen to sounds instead. So, next time you are singing in the shower or reading aloud for your children, consider it as an active exercise that will make your abdominal muscles fit, your chest stronger, and, all told, improve your health.

Roth, Mathias: The Prevention and Cure of Many Chronic Diseases by Movements. An Exposition of the Principles and Practice by These Movements for the Correction of the Tendencies to Disease in Infancy, Childhood, and Youth, and for the Cure of Many Morbid Affections of Adults. John Churchill. London 1851.